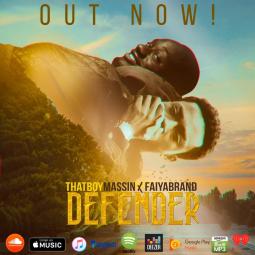 fireman Faiyabrand has joined forces with the Zambian superstar Massin with a fresh single titled Defender. The track was produced, mixed and mastered by Zambia’s finest, Emmzz Touch.

The duo’s influence of the single derives from the war-like nature of God as a man of war; a defender; a present help in times of trouble. Massin cooked up the hook and the basis of the beat before getting Faiyabrand to bring the heat on the beat with his verses, which was wonderfully completed with Emmzz Touch’s final mixing and mastering.

Femi Best Touch’s and Emmzz Touch’s studios were instrumental in the execution of the project as well as the assistance of Shoggy Tosh. The artwork cover was done by 837 House.

Defender drops officially on 29th April 2019 on all good online retail stores.
Faiyabrand dropped his debut single Blessingz on 1st September 2017 and has seen success ever since. He has won 3 awards in the space of 13 months, and is due to release his long-awaited debut EP ‘Keep Your Grind In Prayer’ in the summer of 2019.

Massin responded to the calling of music based on Jeremiah 1:5 in 2010 and has been consistently releasing records to the glory of God ever since. He won the Zambian music award at the Kountapoint Awards in London 2017, and also won the song of the year award at the GXMMA 2018 for ‘Pamoto’, Shoggy Tosh’s song featuring Massin, Annette Bee and Boris One Spitter. This was produced by Faiyabrand.

Massin - Am So Blessed

General and ketta - My love

Joshua Kesler - SINCE I MET YOU JESUS

Chio - The Name of Jesus

Preye Orok - SEPERATED AWAY FROM THE NOISE

Only You Jesus mp3